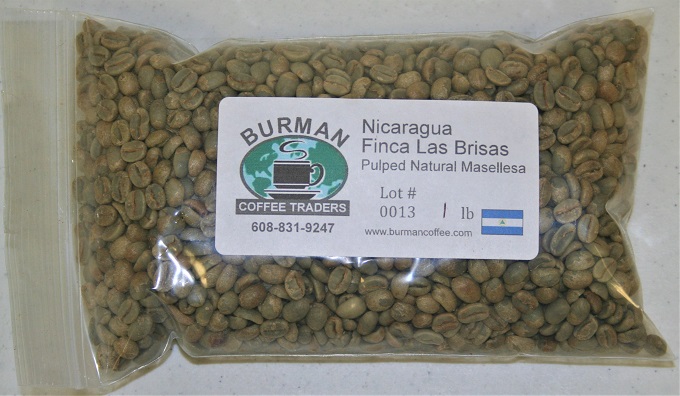 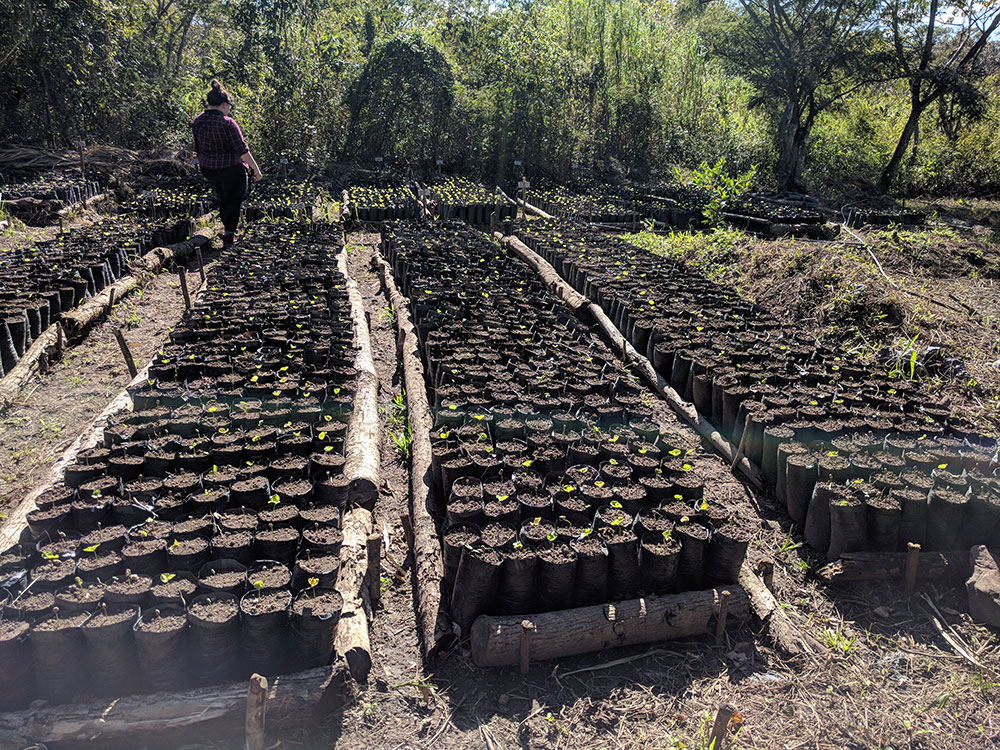 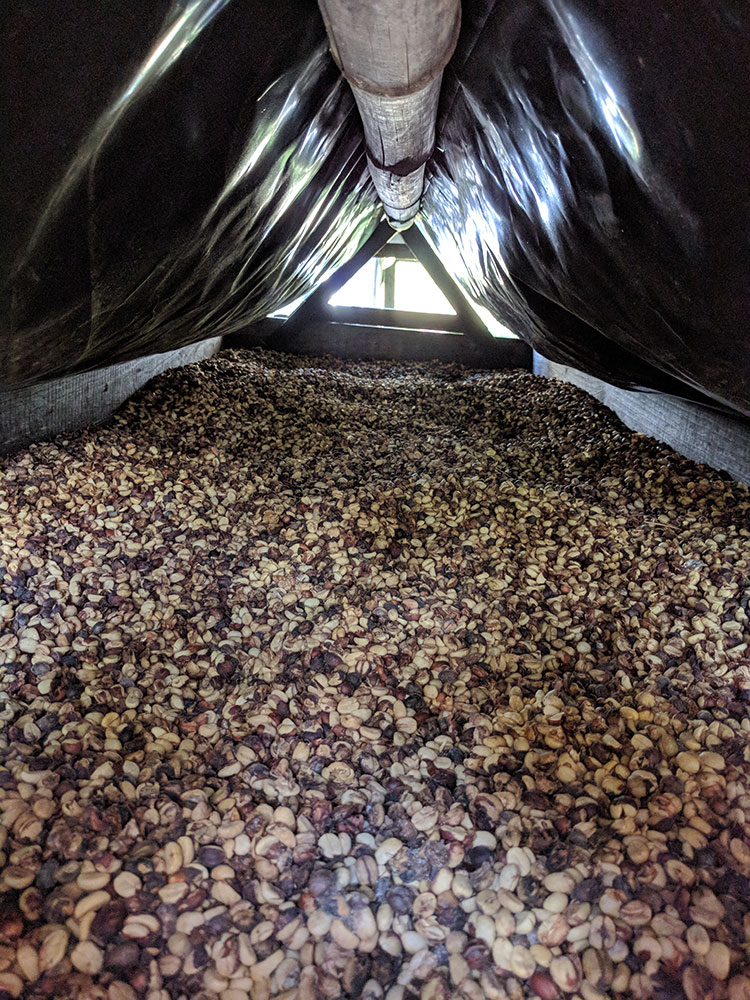 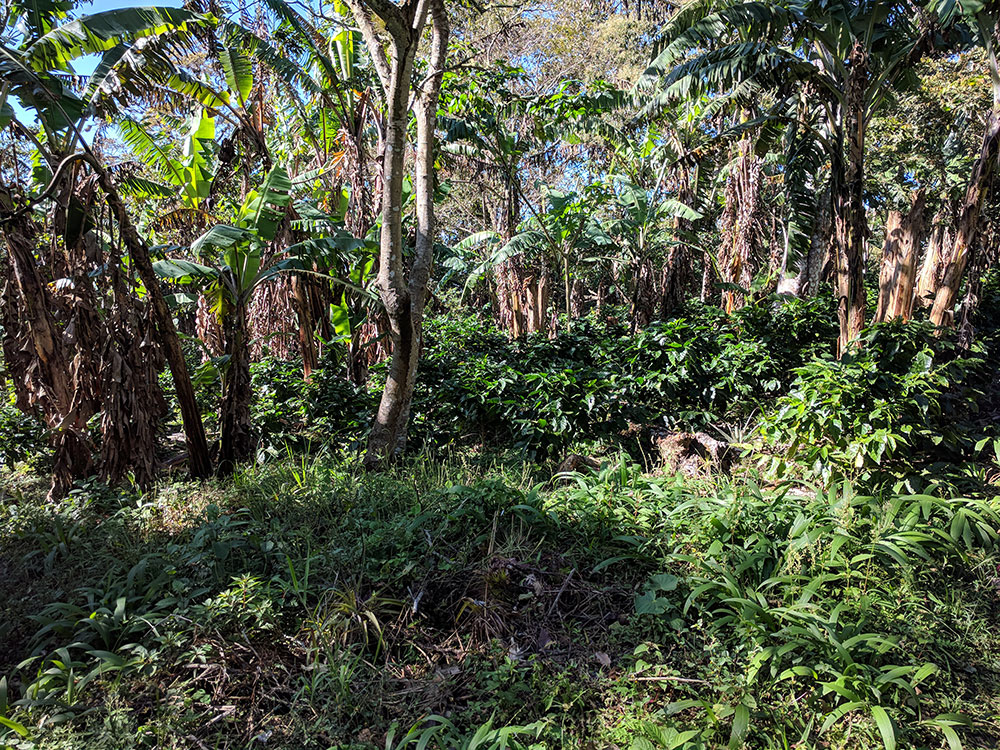 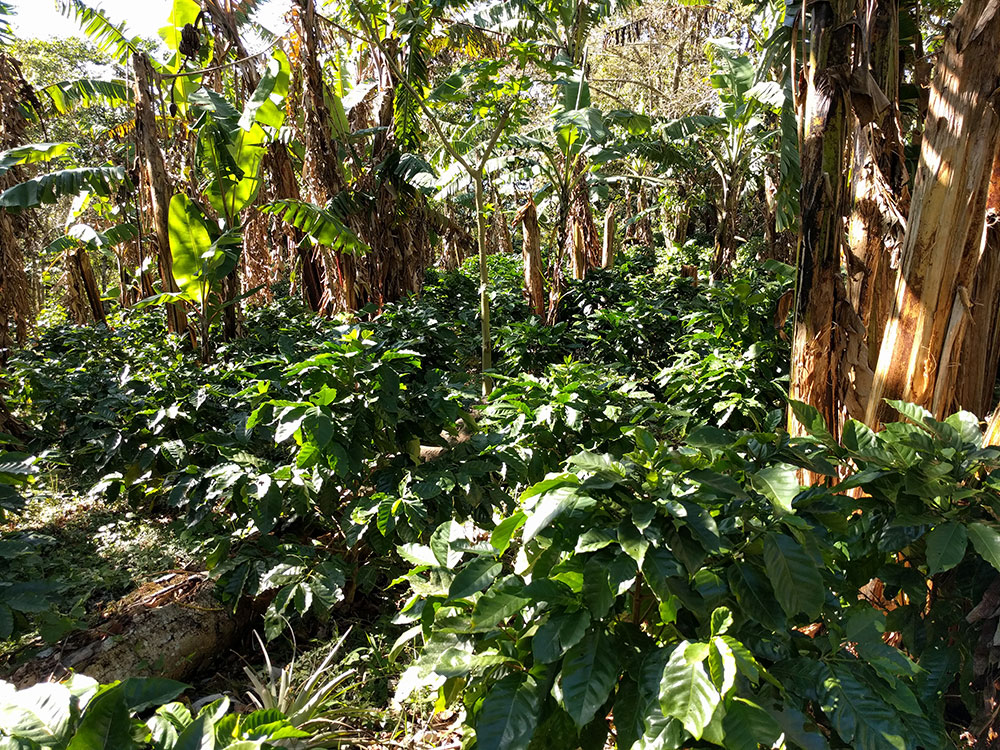 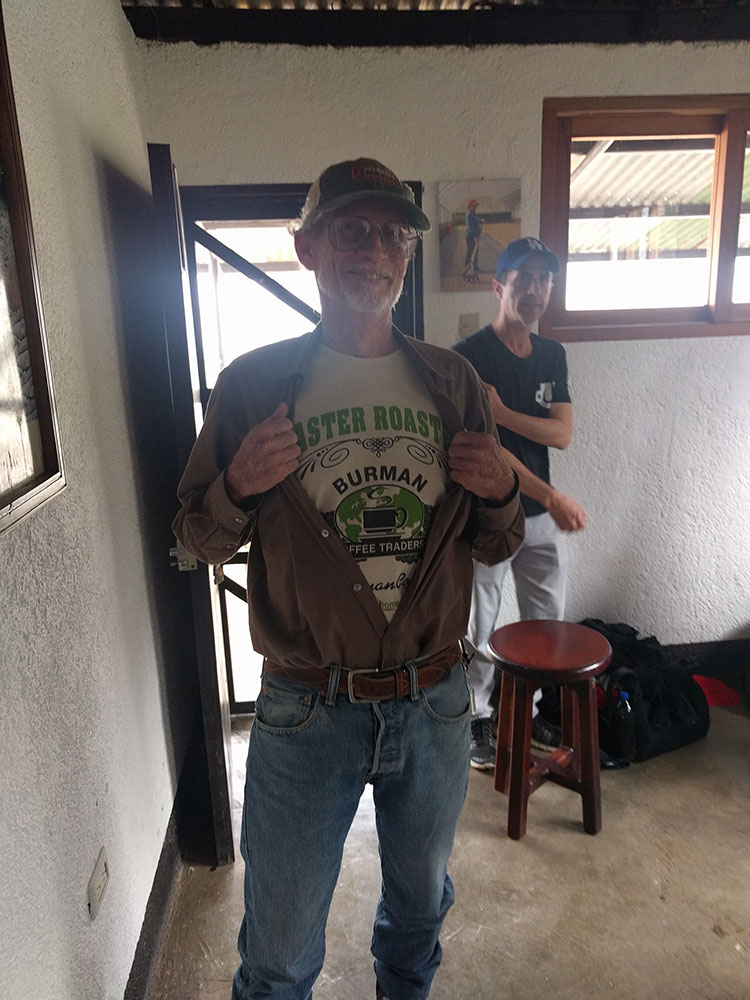 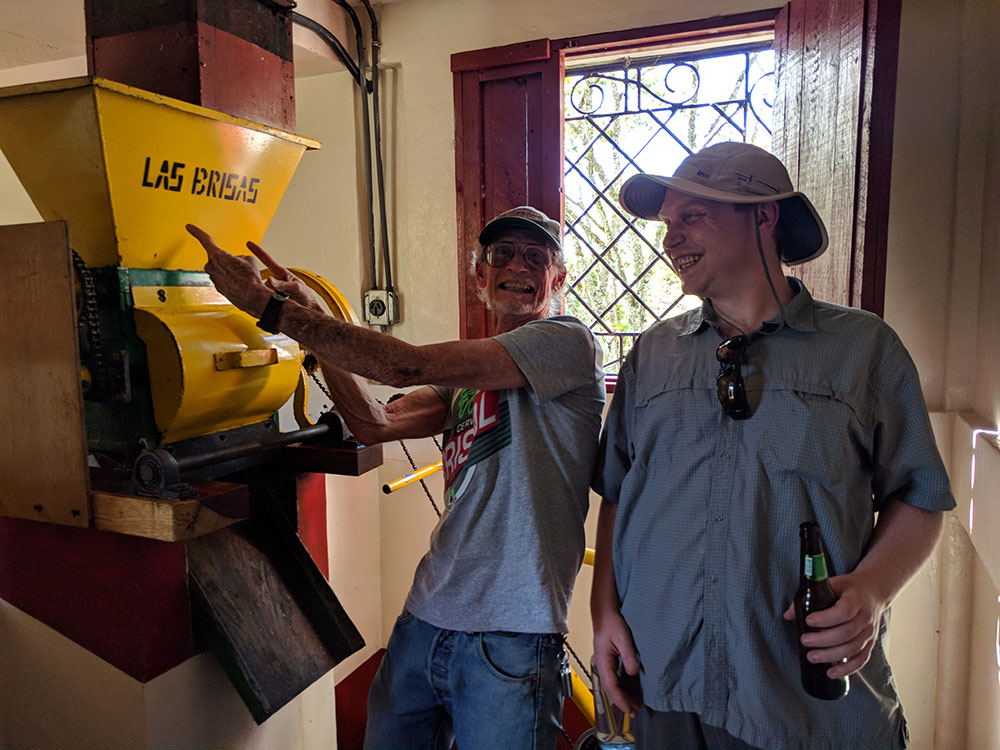 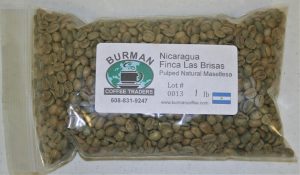 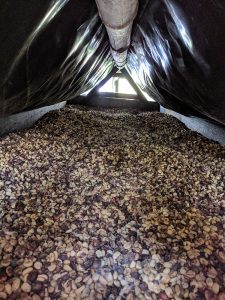 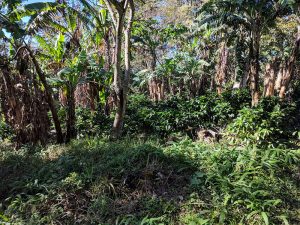 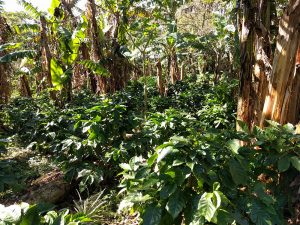 Low Stock Blowout – Only 55 pounds left.
Regular Price $6.99/lb
A very cool natural type cup that almost anyone will love. Although this cup does have some classic natural fruit tones, it is not overly done – you get a little dry cascara type note in the background. Very smooth, good body, lower acidity at most roasts with a nice malty/chocolaty note coming forward. Not quite as mild as last years offering with its stronger malty notes but a very clean cup with an exotic spin.

Low Stock Blowout – Only 55 pounds left.
Regular Price $6.99/lb
This is the fifth season of Finca Las Brisas ! A crop we never thought would exist! Kate has had some awesome support to keep the farm going after Hugh passed late 2019. Originally it was her plan to head back to the U.S. but her heart and soul are in this farm and she has decided to keep it going, with some very tasty results.

Katherine Force owns Finca Las Brisas and started it with her late husband Hugh. They are originally from Colorado but didn’t quite fit in with the culture around them. They had done some work in Matagalpa earlier on and when they finally decided enough is enough, they gathered their things and left to Matagalpa, a beautiful city nestled along the steep mountains.

This is an 8 bag lot from a very boutique coffee farm – only around 10-20 thousand pounds are produced. That’s only about 10-15 pallets and they pour their souls into those beans.  The whole farm doesn’t even produce a full container – it’s all done by hand, and because they are connected with Steve from Selva Negra, we are able to sneak a few bags onto the Selva Negra containers to make transport nice and easy.

I was very surprised when I went to Matagalpa.  The roads were fantastic, even better than around here, except for the road to Kate’s farm. It seemed to consists of small boulders going right up the side of a mountain. I was very surprised to learn that old Hugh was an avid biker and a couple times a day was biking up and down that road. I am not sure I would ever attempt such a feat. Hugh even hooked up his pulper to be run by bicycle. Not only saves power but he gets to bike while working.

Kate strictly employs her neighbors and community members on the farm. Same folks year in and out working to improve their livelihoods and neighborhoods. A prime model for what every business should do.

Tasting Notes: A very cool natural type cup that almost anyone will love. Although this cup does have some classic natural fruit tones, it is not overly done – you get a little dry cascara type note in the background. Very smooth, good body, lower acidity at most roasts with a nice malty/chocolaty note coming forward. Not quite as mild as last years offering with its stronger malty notes but a clean cup with an exotic spin.

Roasting Notes: Start with a solid medium roast and go a little darker if too acidic or fruity for your tastes. Hard to mess these beans up but avoid super light roasts or one will get some punchy acidity and a bit more dry nuttiness. Works very well as a cold brew with good body and sweetness, those soft red fruit tones come right through.

They first came to Nicaragua in 2001 to work with a small technical school for a year, teaching design and installation of rural drinking water systems.  Returning to their “old“  lives of construction superintendent and civil engineer, they found their thoughts were constantly on Nicaragua.  They decided to return permanently in 2005.  In one of those strange vicissitudes of life, Hugh, an avid mountain biker, discovered a coffee farm, nearly abandoned since Hurricane Mitch, while on a ride.

With advice from neighbors, extension agents and other coffee growers, the farm has recuperated, producing about 10,000 pounds of coffee a year.  In addition to 10 acres of coffee trees, it also supports a small dairy herd that produces milk and cheese for the area.  The coffee and dairy complement each other nicely; the cows love the fruit that is stripped off of the coffee berries, and the manure and coffee wastes are composted for use in the fields. They are increasing the quantity of coffee plants each year, starting first by replacing missing, dead or weak plants in existing planting areas. Planting in new areas is started by planting shade cover several years ahead of coffee, so the new plants have sufficient cover. All the coffee is shade grown under mix of banana, orange and diversified hardwood and nitrogen-fixing trees. Although they  are on the electric grid, power is so unreliable that they depulp the coffee using bicycle powered machinery. A day’s picking of 80 pails of coffee fruit can be depulped in just over an hour.

They are a small farm, with eleven permanent workers, growing up to 28 during the coffee harvest, all of them neighbors.  They support the community by offering higher wages, micro loans and transportation for emergency health care.  The agricultural extension agents consider them a model farm and bring groups of farmers to educate and stimulate imaginations.  Support and ideas flow both ways.