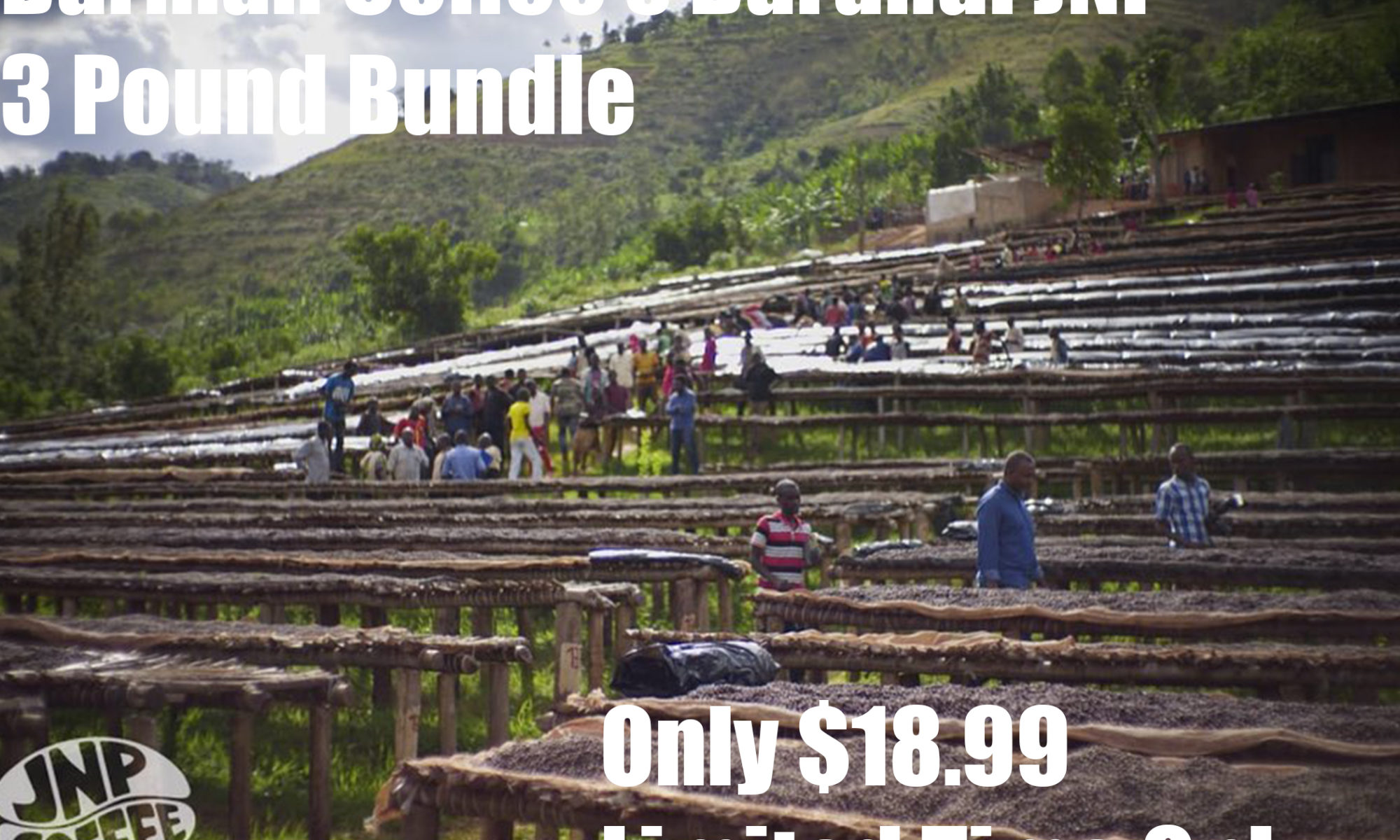 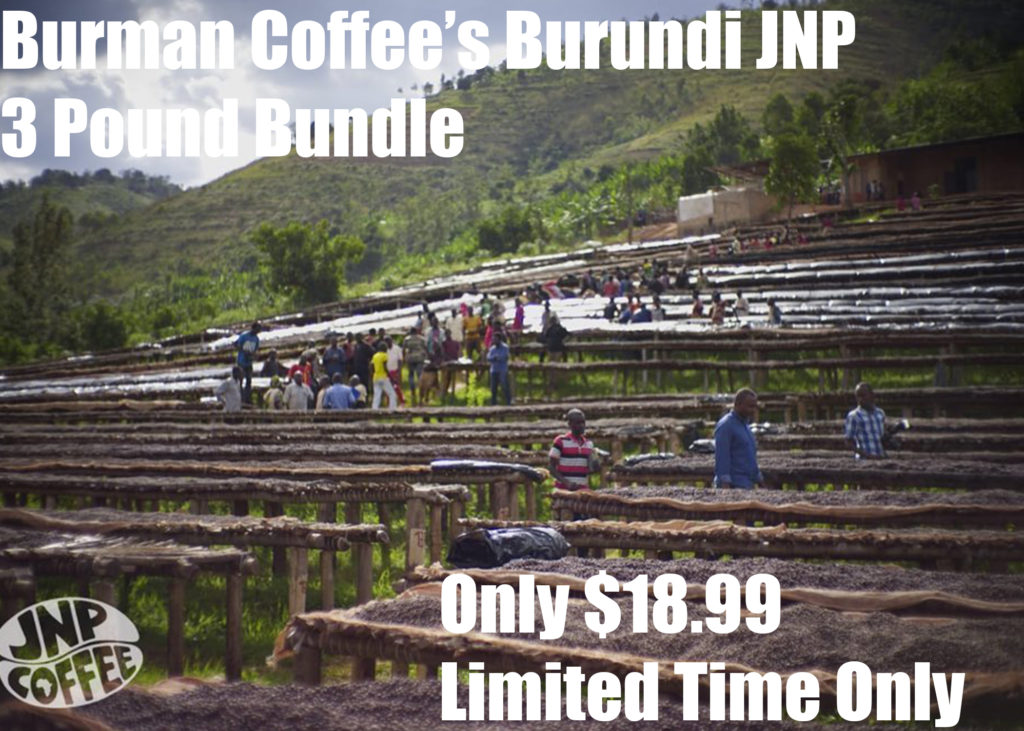 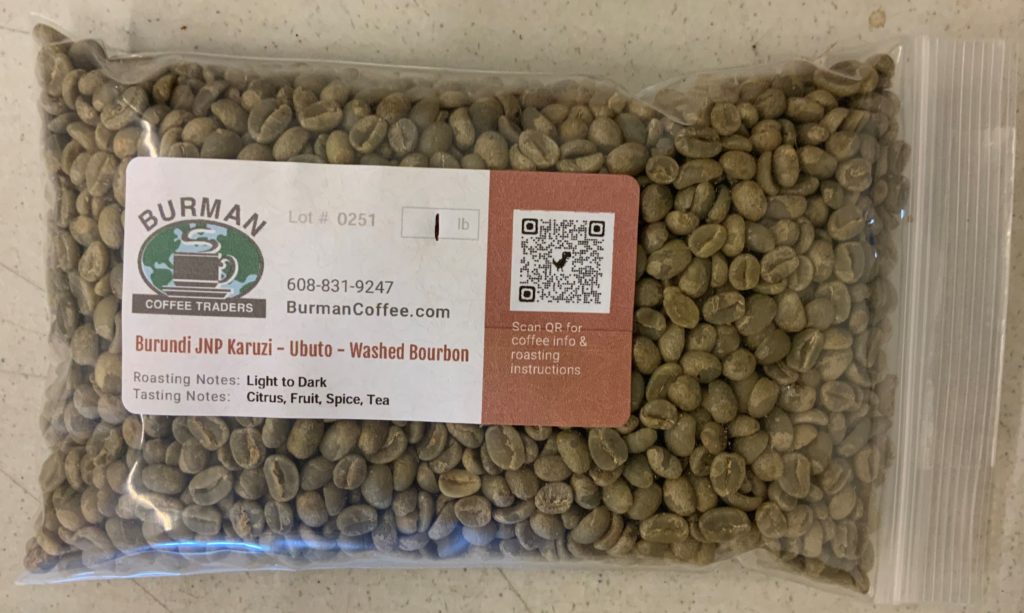 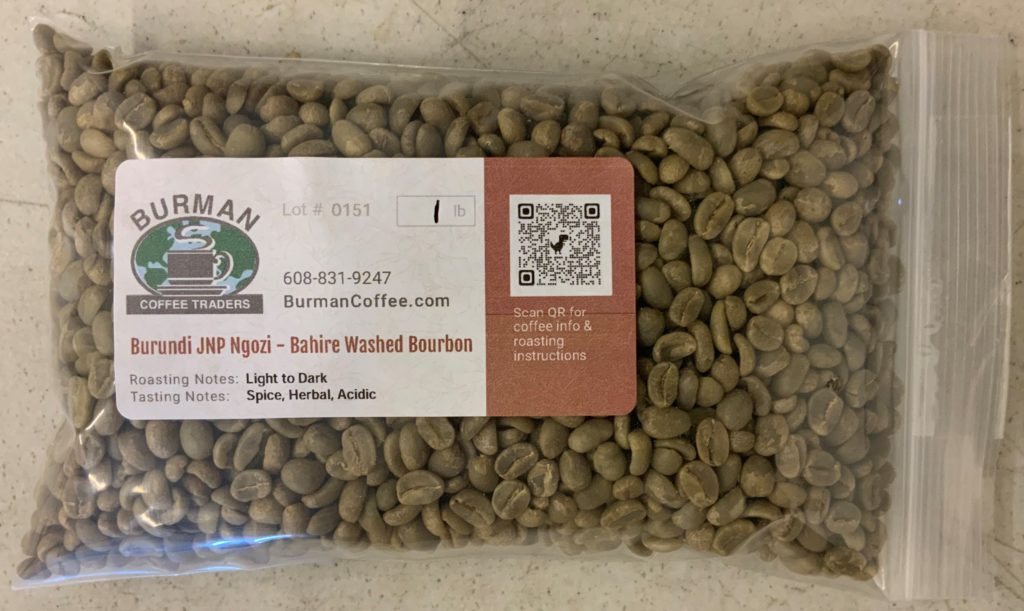 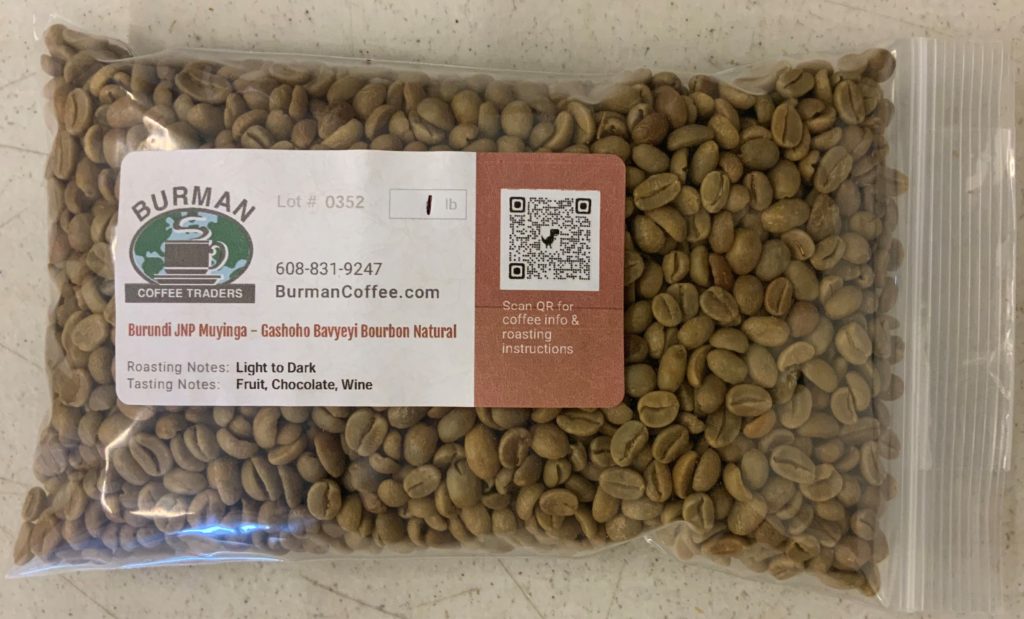 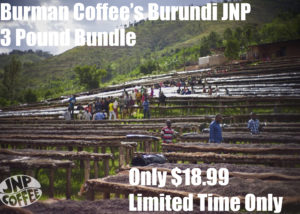 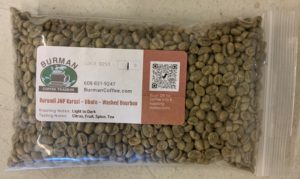 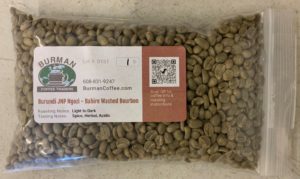 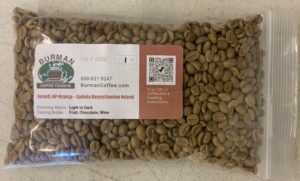 Jeanine Niyonzima-Aroian, the founder of JNP Coffee, is without a doubt one of the most influential individuals in Burundi coffee today.   Raised in the capital city of Bujumbura, Jeanine would go on to earn an MBA from Northwestern University’s prestigious Kellogg School, cycle through corporate America, and eventually reconnect with her birth country by founding Burundi Friends International, a not-for-profit funding educational and economic empowerment programs for rural Burundians, which is now in its 13th year. After a few years marketing Burundi coffees stateside for friends and family, Jeanine realized she had every reason to lead the business, and JNP Coffee was born.

Muyinga province is lesser known for coffee than Kayanza or Ngozi provinces to the west, but that is precisely why Jeanine and her quality team were interested in investing here. Burundi, like Rwanda to its north, is a gifted territory for coffee: elevations are consistently high, soils are generously fertile, and its arabica cultivars are unique to the rest of the coffee-producing world. Muyinga province is no exception, but has not seen the same level of investment as the more developed producing regions closer to Bujumbura. JNP has for years managed a processing station in Ngozi, whose popularity has grown over time. This past harvest they began receiving cherry from yet another group of farmers, from the Gashoho municipality just over the border in Muyinga.

You will get 1 pound each of:

This is one of those additional programs. A local leader of a producer group in Karuzi Province decided to seek JNP’s partnership. Karuzi is located in central Burundi and historically lesser known for its coffee compared to neighboring Ngozi and Kayanza provinces, considered to be Burundi’s top quality producers. The Karuzi group had heard of JNP’s assistance programs and post-harvest premiums and wanted to know how to get involved. Due to exactly this type of demand, JNP has established the “Dushime” program (dushime in Kirundi translates to “let’s be thankful”), which provides quality consulting, lot selection, marketing to JNP’s buyer community, and end-of-year premiums for participating groups not otherwise members of the IWCA.

Tasting Notes:
Of all the Burundi coffee we evaluated this year, this coffee was the brightest. If zesty/fruity acidity is something you love in coffee, this is the lot for you! Full of citric tones, lemon and lime. Very complex cup, hits you after that first sip: there’s a good amount of sugar browning in the flavor, from caramel to brown sugar the sweetness is rich, almost molasses-like. We picked up some dried fruit: raisin, dried mango, dates, and prunes. There’s some black or oolong tea-type flavors, a uniquely Burundian flavor note in coffee, and plenty of hints at spice and florality including rose, clove, and chamomile.

Roasting Notes: An easy coffee to roast, beautiful processing with medium to low chaff. We thought it best at a light roast point, still a bit splotchy in its color, amazingly sweet, crisp and defined. Hints of herbal spice than will go away if you go slightly darker, but add to the wonderful depth of the cup. Light to dark, you are in for a tasty treat!

This coffee, created from only one distinct processing lot from this harvest, has been titled Ubuto, which translates to “young”. The name is a reflection of the brand-new partnership between JNP and Karuzi Province, as well as the literal age of the coffee trees themselves, which among this group are only a few harvests old, and distinctly youthful in the cup: this microlot is toasty sweet and fruited, like graham crackers and jam, with an acidic clarity and delicate floral layer that indicates many years of bright, assertive coffee ahead.

Fully washed processing by the Ubuto group is as detailed as anywhere in Burundi where the best coffees are produced. Cherry is floated for density and visible defects prior to depulping and fermentation. After fermentation is complete the wet parchment is sorted by density in concrete washing channels. Drying takes place at first under shade, and then in open air with the parchment piled into pyramids, which are flattened and re-shaped each day as a form of incremental air exposure to slowly and evenly dry the coffee and lock in the final moisture.

Bavyeyi in Kirundi translates to “parents,’’ a name given to honor the generations of hardworking parents, like Jeanine’s own, whose labor in coffee (something many farming families either do not consume or cannot afford to consume) provides shelter, nourishment, and educational opportunities to their children. While this lot is uniquely coffee harvested by Gashoho farmers, the total number of farmers contributing to Bavyeyi is now over 2,000. All participating farmers qualify for JNP’s Dushime program, a second-payment incentive for delivering the highest quality, which is paid at the end of each harvest, and which varies from 20-40 cents per pound.   Drying naturals in the high and cool Ngozi climate is a painstakingly slow process, often taking 20-30 days to complete, during which the coffee is continuously circulated for even air exposure. Despite having one of the longest drying periods in the world, the cup profile is noticeably balanced and crisp.

Tasting Notes: A fantastic natural! Lighter roasts are where this cup will shine. Hints of winy and lemony acidity comingle with juicy red fruit tones, balanced with a clear and defined chocolaty factor. Almost no African herbal spice in the cup but you may find hints in the aftertaste. Medium roasts get much more chocolaty and smooth, retains the red fruit tone nicely, a very easy to drink cup. Darker roasts pick up some stronger roasty tones, compliments the more chocolaty aspects of the cup, especially as it cools, the fruitiness will jump right out even at darker roast points.

Roasting Notes: Even roasting for a fruity natural but does have some decent chaff on the beans. A slight reduction in batch size will help keep it an easy to roast coffee. An amazingly clean cup at every roast point but to see it shine, keep it lighter.

Coffee grown in Ngozi Province has a special meaning for Jeanine, as that is where her mother grew up. Memories of her mother, leading the family’s coffee harvest to cover school fees, are woven into the name for this coffee. Bahire in Kirundi is a kind of well-wishing given to others that roughly translates to “be well, successful, prosperous, happy”. Bahire is a micro-community of smallholders selected from within one of JNP’s larger communities, Bavyeyi, thanks to their unique terroir. The producer group works closely with JNP Coffee’s trained Q Graders in Burundi on best quality practices and lot curation.  Fully washed processing for members of the Bahire group is as detailed as anywhere in Burundi where the best coffees are produced. Cherry is floated for density and visible defects prior to depulping and under-water fermentation. After fermentation is complete the wet parchment is sorted by density in concrete washing channels. Drying takes place at first under shade, and then in open air with the parchment piled into pyramids, which are flattened and re-shaped each day as a form of incremental air exposure to slowly and evenly dry the coffee and lock in the final moisture. The resulting profile is exceedingly clean, bright and delicate.

Tasting Notes: A lovely coffee, smooth and clean with a bit stronger and more potent and spice tones, especially when compared to most Central American coffees. Reminds me almost of a Kenyan like cup. Lighter roasts show some small hints of a lemony acidity, a little soft fruit tone accompanied with some herbal spice  and chocolate tones, a bit exotic but balanced. Light roast African fans will find some joy here but for most, pushing the beans into a medium roast will be preferred. Mellowed the spice tones of the cup creating a much smoother lower acidity cup profile with a little sweeter edge. One can still get the spice complexities especially in the aftertaste or as the cup cools but smooth, rich and not too exotic, a lovely roast point for a daily drinker. Darker roasts picked up stronger smoky and roasty tones but it complimented the darker spice tones and sweeter edge of the cup.

Roasting Notes: An easy coffee to roast, beautiful processing with medium to low chaff. we would recommend taking it a bit past first crack at a minimum. Right at first crack can pull some grassy herbal notes but it will not take too much more development to turn those tones into wonderful rich and chocolaty tastes instead. Can still be a little sharper edged 24 hours after roasting but by day 3 was very smooth and defined.