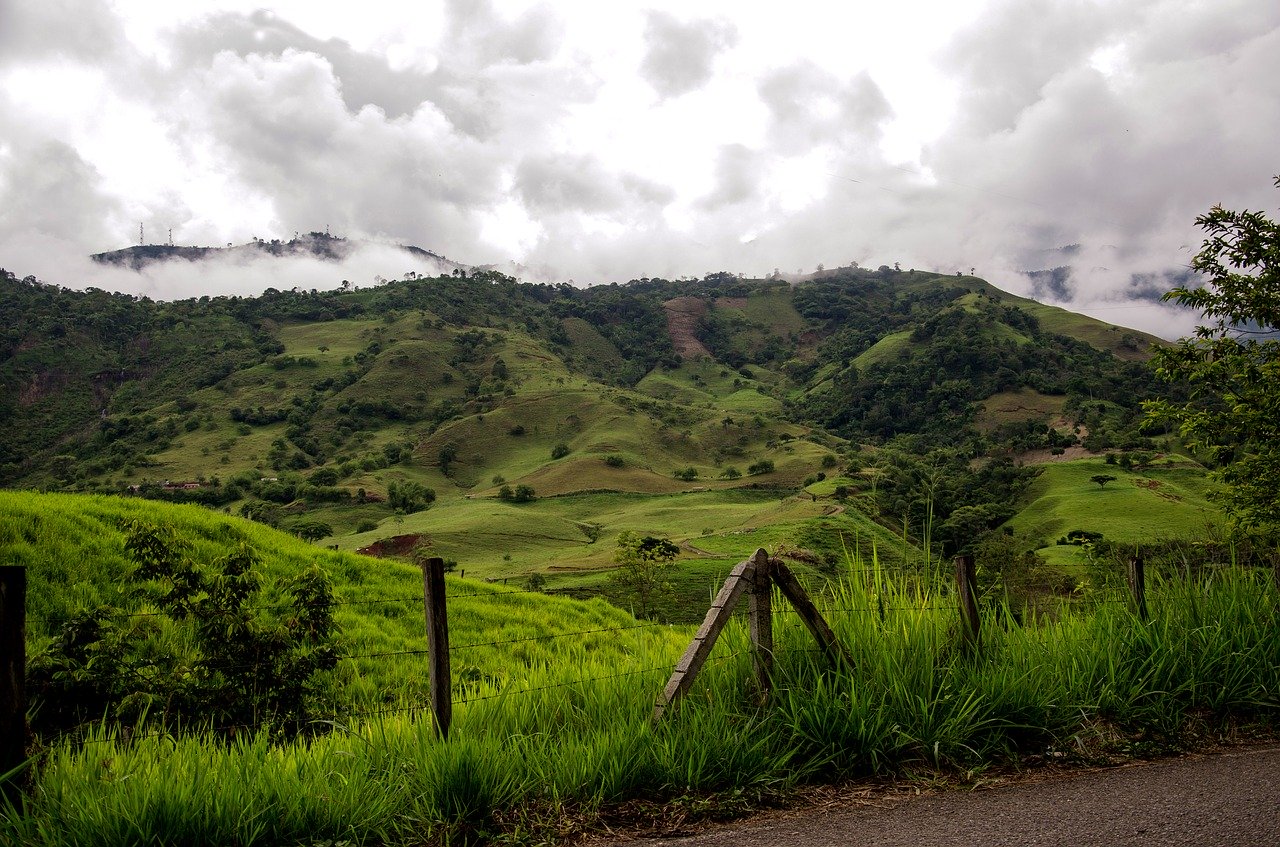 The Colombian Coffee Region has a long history of producing some of the best coffee in the world. Its geographical location gives it a strong advantage in growing high-quality Arabica beans using traditional methods.

Where is the Colombian Coffee Region Located?

Colombia is located in the northwest of South America, close to the equator and connected to Central America via Panama. An area known as the Coffee Triangle produces the majority of Colombia’s coffee. It is located in the Paisa region on the western side of the Andes Mountains.  It includes the Caldas, Quindio, Risaralda, and Tolima departments. (Departments are country subdivisions with a degree of autonomy.)

So How Does the Colombian Coffee Region’s Location Affect its Weather Conditions?

As a country, Colombia has a variety of microclimates. This is partially due to the vast range of terrains – deserts (hot), jungles (humid), and mountains (frigid). In general, the country’s location near the equator gives it a relatively consistent climate throughout the year. Regions near the equator usually experience two seasons – wet and dry.

With This Ideal Climate, How Was Coffee Introduced in Colombia?

Over the years, coffee has grown to be Colombia’s primary export and it has become one of the top coffee-producing countries in the world. In fact, only Brazil and Vietnam produce more coffee than Colombia per year. (Learn about other coffee producing regions in the world.)

A long history of coffee farms anchors Colombia’s position as one of the world leaders in coffee production. Many believe European Jesuit priests first introduced coffee to Colombians in the mid 16th century. Initially, Colombians did not welcome the idea of farming coffee plants. The people weren’t eager to devote five years to establish the coffee plant crop.

So, the story goes that initial coffee crops started small with the help of a Jesuit priest. Located in the small town of Salazar de Las Palmas, this priest had parishioners plant a few coffee plants as an act of repentance. This small practice is thought to have facilitated the expansion of coffee production to other regions in Colombia.

After Its Initial Introduction, How Did Coffee Become One of Colombia’s Main Exports?

Over time, coffee grew in popularity in the United States and Europe. As this occurred, the Colombian Coffee Region expanded its coffee production. However, the first export of Colombian coffee didn’t occur until the 1800s. This first shipment was sent to the United States.

By the end of the 19th century, coffee grew to become Colombia’s main export.

As production grew in the Colombian Coffee Region, organizations were being formed to support these small farmers. In 1927, the Federación Nacional de Cafeteros (FNC), also known as the National Federation of Coffee Growers, was established to help, represent, and protect the rights of coffee growers. The federation is one of the largest non-governmental organizations (NGOs) in the world.

About a decade later (1938), FNC established Cenicafé, a research organization to aid coffee growers with different aspects of coffee production. Cenicafé’s research addresses areas including farm production, processing, harvesting, conservation, and grain quality among other things. In fact, the research organization is credited with developing a disease-resistant coffee variety (Castillo).

With the help of the FNC and Cenicafé, the Colombian Coffee Region was able to successfully expand production. Colombia, at approximately 14 million bags per year, is the third-largest coffee producing country in the world behind Brazil and Vietnam. However, it produces the most Arabica coffee in the world.

How Do Farmers in the Colombia Coffee Region Harvest and Process Coffee?

Colombia is one of the few coffee-producing countries with two harvesting periods each year – spring and autumn.

Small farmers in the Colombian Coffee Region rely on traditional methods to harvest and process their coffee. This is despite advancements made to make the coffee production process more efficient.

For example, because much of the coffee is grown on the Andes mountains with its steep slopes, machines cannot be used to pick the coffee beans. Instead, it needs to be harvested by hand. Therefore, all of the close to 600,000 coffee producers pick the coffee beans from the plant by hand. The advantage of handpicking is that it ensures the best coffee cherries are being picked and moved on to the processing phase.

Their traditional practices are also illustrated through their method of transporting coffee harvests. Many farmers still transport their coffee beans on the backs of mules.

Once the coffee is picked, it gets transported to a processing area. The initial coffee processing step involves removing the skin and pulp of the fruit (coffee cherry) by wet processing. As part of this processing method, the sticky substance (mucilage) covering them is removed. In order to accomplish this, they are fermented in water for 12 to 24 hours to break down the mucilage.

In most cases, the resulting coffee beans are then dried in the sun.

What Flavors Are Representative of the Coffees Grown and Harvested in the Colombian Coffee Region?

Colombia is one of the few coffee-producing countries that grows solely Arabica coffee beans. These coffee beans are higher in quality and are known to have a sweeter and lighter taste. They also have half the caffeine and stronger acidic notes relative to Robusta beans.

However, all Colombian coffees do not taste the same. Coffee flavors can vary greatly depending on factors such as soil conditions and altitudes. Therefore, the Colombian Coffee Region, with its differing microclimates, can produce coffee beans with several distinct flavors. In fact, even coffee from neighboring family farms can have differing tastes.

However, the roasting and brewing of these Colombian green coffee beans will largely determine the resulting flavor in your coffee cup.

There are additional general differences between light vs. dark roast coffees that will help you decide which is best for you.

How Does the Future Look for the Colombian Coffee Region?

Similar to other coffee-producing countries around the world, family farms in the Colombian Coffee Region are facing the difficult effects of climate change. This is in addition to the usual land erosion they have faced on their mountainous terrain.

Climate change has brought about unpredictable weather patterns that result in floods, droughts, and invasive pests. These conditions can lead to diseased crops that can be devastating to an economy that relies heavily on the production of high-quality coffee harvests. In addition, the uncertainty of optimal planting and harvesting periods due to climate change affects farmers’ ability to organize labor.

Family farms in the Colombian Coffee Region are trying to make adjustments to weather the damaging effects of climate change. Many are planting trees to shield their coffee plants from the hot sun and combat erosion. Other measures include the creation of water tanks that collect rainwater for use during droughts.

As the farmers continue to experience the effects of climate change, they will need to rely on the aid of the government and the National Federation of Coffee Growers of Colombia. Working together, they will be able to find new and innovative ways to protect the livelihood of the family farms in the Colombian Coffee Region.

What is the Best Way to Experience Coffee From the Colombian Coffee Region?

If you would like to compare coffee from the Colombian Coffee Region to that of other coffee-producing countries, consider trying our BCT Popular Bundle. This bundle generally includes a pound of green coffee beans from Colombia, along with two pounds from other popular coffee-growing countries.

For Decaf coffee drinkers, the BCT Decaf Bundle generally offers a pound of green coffee beans each from Colombia, along with two other great decafs.